Okay, so I have personal preferences for super-heroes. They have to be human, be able to do cool but slightly weird stuff (please don’t give me your standard telekinesis and ‘Look, mum, I can fly!’), have interesting backstories, and above all, they have to be real – blood, sweat, zits, swearing, BO…yup, gimme the real stuff. That’s it. Basically, I like contemp superheroes, bwahaha.

That’s why I have fallen so hard in the past for folks like the Tick, and Jessica Jones and Luke Cage and the crew from Misfits (they are the best – if only for the first two seasons). I really don’t like the glamour versions of most superheroes on the big screen (and that’s why I’m trying not to get my hopes up for Wonder Woman – I mean, I know what I’d like to see in that movie, but DC mileage frequently varies). It’s one of the reasons why I thought Logan was probably the best X-Men movie to date.

It’s also why ZEROES was pretty much my jam: because it was basically ‘Regular Flawed Teenagers With Superpowers’. 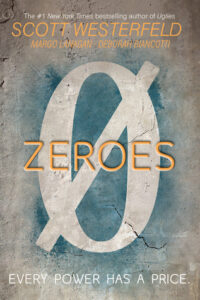 Scott Westerfeld already has runs on the board with this: if you haven’t read his MIDNIGHTERS series, you’re missing out (one of the character’s has mathematics as a superpower – mathematics. How cool is that?). You can see how the US covers for this book kind of capitalised on that (and also he’s mega in the States). And I knew Margo Lanagan would give Good Superpower because she is a bloody amazing writer, so every now and then when I caught a glimpse of Lanagan-ness in ZEROES I was all ‘squee!’ and Happy Glow. I am a newbie to Deborah Biancotti’s work, but plan to correct that immediately, because I could kind of see where she was at during the book, in little details, so now I’m deeply intrigued.

But the idea of a collaboration is that it’s fairly seamless, and I thought the three authors writing together managed to achieve this. In fact, my only complaint is that I would’ve liked it to be less seamless – I wanted to hear the individual voices of the authors more. But that is nitpicks. Another few things I enjoyed: the wry humour (Glorious Leader, heh), and I am also a sucker for the Plucky Band of Misfits trope, so yes, all these things worked for me.

Kirkus mentioned ‘intriguing protagonists and cinematic powers’ – I don’t know quite how ZEROES would translate to cinema, but I’d certainly watch it (maybe just to see Anonymous).

So – thoughts? Give us your opinion of ZEROES, and whether you might be tempted to read the next book in the series, SWARM. Feel free to leave a 1-5 star rating, if you’re time-pressed. You can drop us a line here in Comments, or over on the #LoveOzYAbookclub Facebook thread.

If you’re keen, tell us what your superpower would be, if you had one 🙂

And keep your eyes on this spot, bookclubbers, for the announcement of our next title for May 2017 – it’ll be up on the board next week.