I’d originally planned to send out this discussion post on Jan 28, but given the tumultuous events in America over the weekend I opted to delay going live until today. It didn’t seem quite right to be promoting bookclub chats when people in the US were being herded off airplanes like cattle, and to be honest, people’s attention seemed to be diverted elsewhere. Nonetheless, the show must go on – and I’m sure many of you have thoughts on this month’s bookclub title that you’re keen to air. 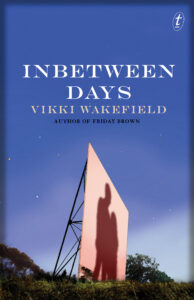 INBETWEEN DAYS by Vikki Wakefield was our ‘lazy summer holiday’ read over the December/January break. It was a good pick on that score: the story has a hazy, dream-like feel that seeps into your head the further into it you get. It also has some of the most beautiful writing I’ve encountered in a while. You know how you sometimes read a good book, and you’ll make note of the occasional phrase or sentence that really glows? Well, incredibly, INBETWEEN DAYS has those phrases on every page. The first description of Jack: She minded the shop. During a conversation with Astrid: I can’t read subtext…It seemed to me that if people would just say what they meant, we’d all get back half our lives in wasted time. Whatever is in the water Vikki Wakefield is drinking, I want some of it.

And it’s apt that the language is so beautiful: it felt to me like one of the themes of this story was communication, and how people can’t express themselves properly and the impact of that. It comes up all the time, when Jack talks to her Dad (‘to say nothing was far less destructive than letting it all out’), the way Jack seems to understand Mr Broadbent despite his inability to communicate properly, the way Jeremiah has to confess his love by saying ‘she’ and not ‘you’.

But that was only one of the meticulous details I noticed about INBETWEEN DAYS, as well as being invested in the characters and plot. Kirkus said of this book: ‘…there’s not a relationship depicted here that is not nuanced and fascinating. Fans of realistic fiction will be all in and will relish the gorgeous writing.’ It was described in Publisher’s Weekly as being ‘unflinchingly honest’. And who wasn’t barracking for Jeremiah?

So what did you think? Did INBETWEEN DAYS hit the spot for you over the holidays? Leave your review on the #LoveOzYAbookclub Facebook group thread, or here in the comments. If you’re strapped for time, feel free to leave an out-of-five star review. And if you didn’t have a chance to join in the live author chat with Vikki Wakefield, you can check it all out here.

I’ll be announcing February’s bookclub title this week, but in the meantime, what do you think about a competition? I was thinking that you folks on the bookclub team might like the chance to select a great title for us this year, possibly in March. I’ll announce details of the competition next month – I’m keen to see what a guest title-selector will pick!

So until the next bookclub announcement, have a great week, take care of yourselves out there!