Hi team! May proved to be one of the busiest months on record for me, but now we’re in June! Phew! And we have a great new book to read, which is good, because I really want to spend some time flopping around and reading. I reckon I’ve earned it.

The title for June 2017 is INTO THE RIVER by Ted Dawe. 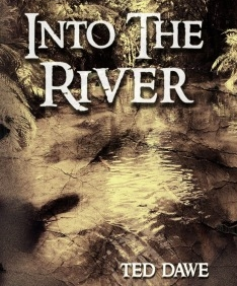 I know, I know – the author is a New Zealander, which makes this book not strictly ‘OzYA’. But I’m more than willing to extend the OzYA umbrella to cover our neighbours across the water. Plus, I think any book that was banned, then re-released with a ‘Parental Advisory’ sticker, has to be worth a study.

Apart from its original banning by the NZ government, I knew very little about the contents of INTO THE RIVER. But here’s a brief synopsis:

“When Te Arepa Santos is dragged into the river by a giant eel, something happens that will change the course of his whole life. The boy who struggles to the bank is not the same one who plunged in, moments earlier. He has brushed against the spirit world, and there is a price to be paid; an utu to be exacted. Years later, far from the protection of whanau and ancestral land he finds new enemies. This time, with no-one to save him, there is a decision to be made…he can wait on the bank, or leap forward into the river.”

I’m very curious about this book, and about what the fuss was all about. I know that Ted Dawe’s previous work, THUNDER ROAD, was awarded Best First Book and Best Senior Book in the NZ Post’s Children’s and Young Adults Book Awards (and also looks like a book I’d really want to read). All I knew about the censorship issues around INTO THE RIVER was that it was published, challenged (by Family First, a Christian-minority political party active in NZ – and Australia), sent to the censor, passed, and was then challenged again. That time, it failed to pass the NZ Film and Literature Review Board. The book was subsequently banned, and all copies were pulled from shelves and libraries.

It was the first time a book had ever been banned in New Zealand. I was shocked that this could happen in a country so close to home – I even wrote about it. I’m not a fan of censorship (even though there are books in the world that I find icky, like AMERICAN PSYCHO and Amish romance), and I couldn’t quite believe that a minority Christian influence could dictate to the general public what they could and couldn’t read. Ted Dawe wrote an article about it for the Guardian here, in which he said, ‘As we blunder into the new millennium we need a literature that is prepared to roll its sleeves up, to get dirty, to be fierce but compassionate, to say the unsayable’.

I’m looking forward to sinking my teeth into INTO THE RIVER, and I hope you are, too – and I’m really looking forward to the conversation around it. Ted Dawe has been in touch to say he’s excited that we’re tackling his book. Let me know what you think about this month’s title choice here in Comments, or at the #LoveOzYAbookclub Facebook thread. You can order INTO THE RIVER – now it’s been un-banned – through Boomerang Books, and use the ‘loveoz’ code to receive free shipping.