Okay, first of all: I have no idea why this book was banned.

The story exposes an unpalatable side of elite private boarding school education. But this is a side we know from (many) previous books – I was vividly reminded of Bryce Courtenay’s Power of One, and even Rebecca Starford’s Bad Behaviour springs to mind – and it’s not exactly a taboo subject. Even everyone’s most beloved school, Hogwarts, has a touch of that archaic prep school nonsense (and a certain amount of bland bigotry) that makes boarding school sagas so bizarrely fascinating, particularly to people (like me) who’ve never gone to one.

Other than the weirdness of elite boarding schools, the story contained swearing, sex, drugs and alcohol, and adults preying on teenagers. But I’ve read these things in other books – even in other YA books. Why all the outrage? Maybe Family First representatives in NZ lead very sheltered lives. One can only assume so.

Again, as with some other literary YA books we’ve covered in bookclub, I didn’t know if INTO THE RIVER could be called a YA book. My main criteria for calling a book YA, I’m realising, is the answer to the question ‘would teenagers voluntarily pick up and read it?’. INTO THE RIVER didn’t read much like a YA book in the first half, although the second half had more of a Chbosky feel.  Yes, the book is written from the perspective of a teenage protagonist, and it’s dealing with things that teenagers would benefit from reading about. But Te Arepa has limited agency in the story – it’s largely external (adult) forces that move the action. And teenagers themselves are notorious for running a mile in the other direction from anything labelled as ‘beneficial’ for them. While I enjoyed it, I don’t know if many teenagers would find it easy to get into.

The cover needs work. Was this book released by Penguin Random House? It was indeed released by PRH. Where was their cover designer that day? 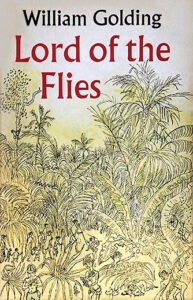 The Deputy Chief Censor of Film and Literature in NZ pronounced about INTO THE RIVER, ‘The book is notable for being one of the first in New Zealand which specifically targets teenage boys and younger men – a genre that does not have great representation’. Leaving aside the fact that the Deputy Chief Censor doesn’t seem to understand what ‘genre’ means, and the dubious question of whether boys and men are adequately represented in fiction (and breaking it down further, in YA fiction, and then even further, in YA fiction written and published in NZ)* I still don’t know that the book specifically targets them, above and beyond the fact it has a male protagonist, and the plot deals with his inner state of mind and ‘boy stuff’. If I was a teenage boy I wouldn’t pick up the book based on the cover. But then I might not pick up Lord of the Flies based on the original cover, either.

But maybe the ‘boys and men’ thing was simply an additional excuse to get the book unbanned. Folks, c’mon – don’t ban books. It’s superdumb. It makes you look superdumb. And – ohmigod has nobody from the conservative right noticed this? – it generally only encourages more people to read the book! Yes! Free publicity! If you want a book to sink without a trace, just treat it like a normal book and nobody will notice it. But if you want everyone to sit up and pay attention, then sure, ban it, by all means. Knock yourself out.*

The Maori perspective was transgressive and compelling, and offered a genuinely challenging view. That was actually the part of the book that drew me in. But I felt it was completely overshadowed in the second half. There was a lot of build-up about Te Arepa’s ancestral heritage in the first half of the story, but by the time the book finished I was left wondering why, as it’s not something the character goes back to. I got a sense of promise wasted. But maybe that’s what Ted Dawe was trying to illustrate. Or maybe it’s something he returns to in the sequel THUNDER ROAD. I don’t know. I was left strangely unsatisfied, though.

I do want to read the sequel THUNDER ROAD, now, though. And here’s some other reviews, if you’re interested, from Kirkus and Publisher’s Weekly, and they both seemed to like it pretty good, so maybe it is just me.

And I still don’t understand why the book was banned!

Help me out here, people.

*Uh, call me crazy, but you just can’t convince me that boys and men aren’t adequately represented anywhere in hundreds of years of literary canon written by guys.

*Irony, people. Of course I’m not advocating for banning books. Books should not be banned. That is wrong. *wags finger*