I’m often reluctant to schedule Big Books for bookclub. I’m sure you know what I mean by Big Books – novels that are so heavily promoted and frequently talked about that additional introduction seems unnecessary. It seems almost a shame to give these books extra attention because they already have such huge buzz, and there are so many other under-appreciated OzYA books out there that are begging to be read. I generally prefer to schedule books that I think need some special lovin’ from new fans, so I generally have a knee-jerk, ‘Uuuhhh, no’ when a Big Book comes along.

My primary consideration for scheduling novels in bookclub is generally: a) do I want to read this book, also – b) does this book deserve closer attention, followed by – c) will teenagers enjoy this book? Is there something special in it for them? Because I believe you should always take it back to the teens. YA books are designed and written with them in mind.

GEMINA falls into Big Book category. But I had no problem scheduling it for bookclub because I have seen, again and again, how much teenagers LOVE this series. Also, it’s just SO FREAKING GOOD. 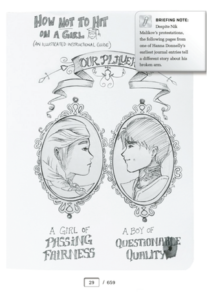 I am in a constant swoon at the format of these novels. The epistolary story-telling technique – using notes, memos, reports, interviews, transcripts, pics, drawings (Marie Lu did the drawings! – what a SUPERSTAR), diary entries, ship’s logs, emails, audio recordings, IMs, computer printouts and more – lends the story a feeling of authenticity and immediacy. I wanna write an epistolary novel!! (Actually, no, I probably don’t, cos it looks freaking hard, not to mention I think my copyeditor would want to bathe in my blood) But basically, you feel as if you’re IN the story while you’re reading it – it’s like being on-set in a documentary. And that feeling of immediacy and up-to-the-minute action is something that has drawn teenagers (and other readers) into the story.

And of course, there’s the characters. Let’s just get this out of the way: Nik is hot. He’s the criminal with a heart of gold, and there’s something personable and vulnerable about him that gave him more than sufficient heft to transcend any stereotype. And Hanna is also hot. And she kicks butt in this book, in quite a realistic way. I totally got the Die Hard references in this story – Hanna and the lightbulbs, folks? – and I ate that stuff up.

AND DON’T GET ME STARTED ON ELLA PAUCHOK, MY LITTLE SPIDER, I LOVE YOU.

All the way through, I was literally nail-biting and racking my brain to figure out how Kaufman and Kristoff were going to write their way out of this scenario. The odds are so heavily stacked against the heroes (excuse me, the Lanima?) that I was wondering if it was even humanly possible to pull this off. But they did. And I totally loved it.

So that’s my review. I’m not linking to other reviews, because there are so so many, and I want to hear what you all have to say about GEMINA. Call out in the comments, give the book a 1-5 star rating if you’re strapped for time, or contribute to the on-going discussion in the Facebook group thread.

And see you next week for the announcement of the title that will keep us going into 2017 – excitement!